I recently received an email suggesting to adding features to aircrack-ng. Even though most of the stuff can be found in the documentation, it might be worth talking about.

Aircrack-ng can read words from a pipe, which is very convenient and you can use pretty much any program to generate words and display them on the screen (each line will be considered a word) and pass them to aircrack-ng.

In this example, it decompress file.gz and 'cat' the result to the screen, then we pipe it to aircrack-ng. Aircrack-ng reads wordlists files using -w and in order to tell it to get it from a pipe (to be technical, stdout from the previous command became stdin in aircrack-ng), you have to use the '-' as parameter for -w.

airolib-ng can generate tables (in SQLite format) or import them from cowpatty's format. Once the table is generated, use -r in aircrack-ng to read them (instead of a wordlist).

There is a tool in the script/ directory to do that called dcrack.py. As a matter of fact, check out that entire directory, there are a few useful scripts in there.

Running the script will give you a help screen. Here is what the architecture look like to better understand the different parameters: 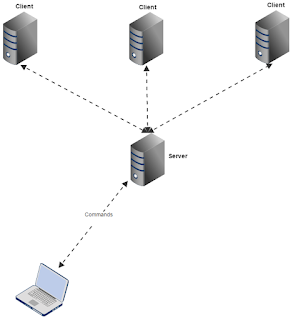 The different clients represent the cracking systems, the server coordinates everything based on the performance of each client. Each client joining the server will have its performance assessed and when a wordlist is uploaded, it will be split according to each client's performance so they all take the same amount of time to process the dictionary.

When uploading a PCAP  file, it is highly recommended to clean it up and just leave a beacon as well as the 4 EAPoL packets (or less if you have less) of the 4-way handshake or you'll risk aircrack-ng choosing the wrong packets when cracking. There is a tutorial about it in the wiki.
Posted by Mister_X at 2:29 PM