The wiki and trac implement OpenSearch and when the browser notice there's an OpenSearch on the website, it add a small notification on which your can click to add the search engine:

Firefox shows it with a light blue shadow on the icon of the search textbox like that: 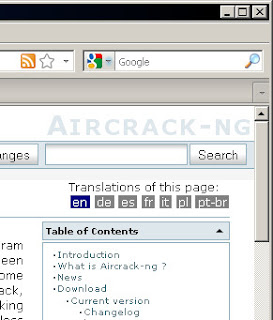 IE shows changes the color of the search engine selection to orange:

Just click on it, and you can add wiki and trac search engines to your favorite browser: 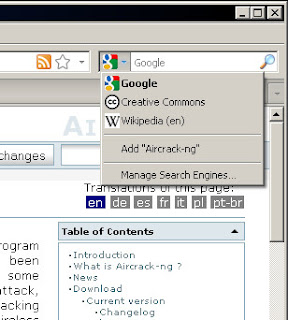 Actually, trac is not completely working. It's better than before, we can commit but now we can't see them in the timeline and also the source browser is not working anymore.
I tried to debug a few days ago but I haven't found why it doesn't work. The path to the svn repository is correct, permissions of trac and on the filesystem are correct so I'm a bit out of ideas.

About the commits, I updated to 1.0 and tagged it and also committed a few patches to fix bugs:
- Client first seen and last seen in kismet netxml file
- Compilation on cygwin 1.7
- OSX patch: Ticket 653: Tap support for Darwin/OS X
- Other small things

The next bugs I'll take care of are:
- Ticket 704: Fix broadcast and multicast detection in aircrack-ng: it still require some work.
- Ticket 498: Aircrack-ng does not support dictionaries over 2Gb
- I'd like to fix another compilation bug on OSX (Ticket 687) but I don't have access to any Mac so if anyone could give me an access to a mac with Darwin and another with Leopard, that's great :). If anybody is getting rid of a Mac with darwin/leopard, we are really interested.
- Ticket 713: Invalid channel parsed from packets with mac80211 drivers

I haven't chosen the other bugs yet, but I still have in mind that WPA handshake detection has to be fixed/enhanced and I remember a bug with airbase-ng not giving the Information Elements in the right order.


There are a few interesting programs and scripts in the forum, and I'd like to give them more visibility (and even small scripts). What are your ideas/opinion about it?


I haven't forgotten the t-shirts. They will be there soon. I might do a few with the new logo for Shmoocon.

First of all, we wish you a happy new year.

There was no news here and no commit on trac since some time but we never stoppped working. Although svn commit wasn't working for us (see previous blog entry for more details), we used the tickets to store all patches that have to be committed.

But I now have some good news, trac is working again. Don't ask me why, I have absolutely no idea, and I didn't change anything (except doing the usual updates).
So that means I'll commit everything to sync svn with 1.0 final and then start committing all patches that were added to tickets since August (that's when svn commit stopped working) and others that were planned for 1.1. That will take a few days :)


I'll also try to update this blog at least once a month to tell you what happened during the last month in our forum, trac and on IRC.

Here are a few things that happened recently:
- Online WPA cracking services: with cloud computing that was launched begin december then now with GPU.
- Injection and packet capture with aircrack-ng seems to work with the Nokia N900. I also read that it will have USB host soon.
- Beini 1.0-RC5.1: A wireless network security testing system,it is based on Tiny Core Linux.
- GUI for aircrack-ng in C# using Mono.
- minidwep-gtk a GUI for aircrack-ng in shell script.
- Slitaz Aircrack-ng: the base Slitaz cooking version plus the latest Aircrack-ng SVN version, wireless drivers patched for injection and other related tools.


I am also currently installing a new server (Core i5 2.66Ghz, 8Gb Ram, 2x 80Gb SSD) for aircrack-ng. That will allow us to organize better the different parts and give a better service to our ever growing community ;).

Our webhoster offers ESXi and I first wanted to use it to virtualize our stuff but it takes too much time to stabilize it (and IP management is a bit tricky/expensive) and since I didn't wanted to wait any longer, I switched to vmware server for the different parts:
- trac and buildbot.
- forum.
- downloads: videos, patches, storage, archive, nightly builds, ... (we currently have around 20Gb of stuff).
- photos and videos of the conventions (btw, I'll soon post the pictures I took during 26C3 and of other conventions).
- a few other virtual machines for testing.
The main website and wiki will not be moved.


Last but not least, I would also like to thank again everybody who help us, not only the donations (although important to pay the servers and domains), but everybody who contributes to the project: in the forum, irc, in the wiki (documentation and translations), bug reports and bug fixes, improvements, ...